Hello and good morning.  It’s Thursday, and so it’s time once again for my traditional Thursday blog post, which always starts with some variation of “Hello and good morning”, as you have just seen.  It’s the second Thursday of 2023, and it is the 12th of January, meaning that tomorrow‒as I’ve noted before‒is Friday the 13th.

I apologize for the tone and content of yesterday’s blog post, which feels to me as though it was unusually dank and dismal.  I’m not apologizing because I didn’t mean what I wrote; I did mean it.  If anything, I tend to understate things.  But I’m sorry to have foisted all that on you lot.

What I wrote yesterday is true, though.  I have a difficult to terrible time seeking out help, so when I get even the slightest urge to do so, I have to try to get it out there.  Because the fact is that I could really use it.  But my mental resources‒and my physical ones, let’s be honest‒for seeking help are stunted or crippled or maimed or whatever you would want to call it.  This blog, at least now that I’ve made it “daily”, is to a large extent my attempt at a proverbial cry for help.  But it’s not doing very well at that.  Not even close.

Maybe I always suspected that would be the case?  Well, no, I think it’s more accurate to say that I feared it might be the case.  If I had truly expected there to be no benefit, I wouldn’t have bothered.  I don’t have quite the kind of mental twistiness that leads one deliberately to do things one doesn’t think have any chance of working.  I really do (and did) wish that somehow this daily blog writing would help me gain some form of mental improvement and possibly even entice someone or something somewhere to help me…somehow.

It’s vague and nebulous, I know, and rather laughably optimistic.  I might as well just play a random Powerball ticket.  Getting millions upon millions of dollars would certainly at least give me greater freedom and resources to seek out help than just about anything else that’s physically possible to have happen to me.

And if wishes were horses, we’d all be hip deep in horse shit.  In which case, climate change would be much worse than it is, because all that horse shit gives off a lot of methane.  And even if you burn the methane, that just gives you a molecule of CO2 and four molecules of water for each molecule of methane burned (in oxygen, anyway), and each of those new molecules is another greenhouse gas*.

Anyway, that’s my mea culpa for yesterday, sort of.  Not that I think I did anything truly wrong, mind you.  I mean, it’s my blog.  It is whatever I want to make of it, and no one is forced to read it**.  If they choose to do so, well then caveat lector, or whatever the appropriate Latin would be.  Let the reader beware.

But the reader doesn’t have to beware all that much, because, in the end, these are words, words, words, as Hamlet said to Polonius when asked what he was reading.  I love words, and written language, obviously, but it is nevertheless true, as we used to say in grade school, that “sticks and stones may break my bones, but words can never hurt me.” And by hurt, I mean literally, physically.

Of course, words do have power.  Language can affect the world, and is the means by which we exchange, record, and pass down knowledge and other information.  Written language is the lifeblood of civilization.  But it is only the blood.  It is not the muscle or sinew or bone.  Words cannot conjure magical beings or events, as they can in stories, other than in the sense that they can be used to make such stories.  Perception is not identical with reality, speech is not violence, and as DMX said, “Talk is cheap, motherfucker.”

I don’t know how I arrived at that point in this blog, but it is a message I try very hard to get across.  We can be glad indeed that words cannot literally hurt people, because if they could, it would make the picture of a world in which wishes were horses, complete with their copious excrement, seem almost paradisiacal by comparison.  I know that my wake would probably be littered with corpses.

Hey, maybe that would be a good idea for a horror story (probably a short one): someone discovers that their words literally have the power to hurt people or make other things happen.  It could be called Sticks and Stones.  Actually, I’ve already written a story that has some of that aspect, in The Death Sentence, and I think H. G. Wells wrote a story about a guy who could make things happen by speaking, quite a long time ago.  Not that the concept is exhausted, of course.  There are many things, potentially, one could do with such a story idea.

Oh, well, whataya gonna do?  I hope you all have a good day today, and look forward to tomorrow, which is a Friday the 13th, but has nothing to do with the overworked movie franchise.  That’s got to be worth celebrating, right? 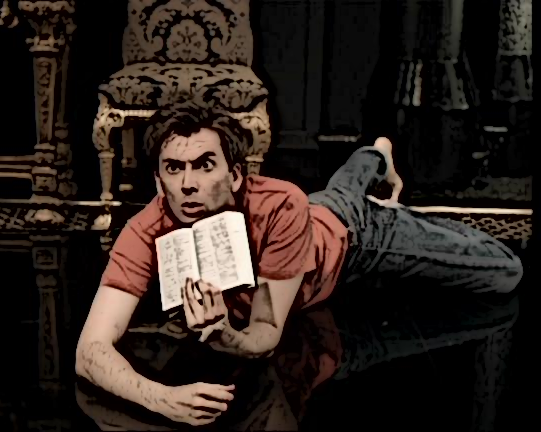 *The “m” is right above the “period” on this phone keyboard, so I briefly made a typo, which the autocorrect showed no sign of changing, that read “another greenhouse gasm”. This sounds like something that might happen to a truly passionate plant lover upon entering a lush, indoor botanical garden when it was deep winter outside.

**Not by me, anyway.  And I don’t think there are any sadists out there cruel enough to make someone read my blog when they have no interest in it.