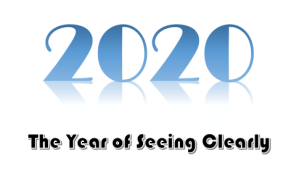 It’s 2020 (AD or CE), a year that I’ve personally dubbed #TheYearofSeeingClearly*.  My book giveaway is now officially over, sad though that may be.  For those of you who took advantage, I hope you’re enjoying or will soon be enjoying your chosen books or stories.

I haven’t posted anything on Iterations of Zero since my last blog post here…the last two musical posts went out on December 25th.  However, given that the holidays have been underway, I feel it’s okay to give myself one week of a miss.  Now, however, there is no further excuse.  It’s a new year**, and even a new decade by most people’s reckoning, and while there may be nothing magical about the transition, it does serve as a good psychological milestone by which to set one’s goals for self-improvement.

I like the idea of striving to see clearly in this new year because of its coincidental numbering.  It would be nice if we could encourage people around the world to use this year to become more aware of their biases and blind spots, to work at removing the beams from their own eyes so that they can—when necessary—assist neighbors who have asked them to pluck out an occluding mote.  Of course, there’s a bit of a contradiction in trying to encourage other people the world over to be less critical of others and instead to try to look at themselves a bit more harshly with an eye to self-improvement.  Isn’t the very promulgation of such advice a violation of its own precepts?

Maybe in a small way, but it’s not advice that’s focused or targeted on any one person, but on us all, especially on me.  Goodness knows I have plenty of room for improvement, self- and otherwise.

I am, however, trying to achieve such improvements, on several fronts, though I try not to be overly ambitious on each of them, lest they get in each other’s way.  One thing I’ve learned at least to some degree by this stage in my life: you can’t let the “perfect” be the enemy of the good.  I’ve long tended toward an attitude of ruthless perfectionism with respect to myself, with the additional, cruel parenthetical that I know that I can never be perfect, so I can never be good enough.  However, as I’ve pondered things throughout the years, I’ve come to the conclusion that, except regarding quite simplistic processes and ideas, the very notion of perfection is mostly vacuous.

To say that we are shooting for perfection implies that there is some upper limit beyond which we can never go.  But as math and science seem to show us, there is no real upper limit to many processes.  We can always improve, always find ways to make ourselves, and our cultures, and our creations, better.

Einstein is reputed to have said that there are only two infinite things:  the universe and human stupidity…and he wasn’t sure about the universe.  That statement about infinite human stupidity—perhaps infinite ignorance would be a better way to think of it—implies an infinite potential for human improvement.  We can keep getting better, as individuals and as a whole, without ever reaching a stopping point, until the end of time itself, if there is such a thing.

One may never reach the peak of an infinitely high mountain, but one can climb higher and higher, and be able to see farther and farther, to ever more distant horizons, with new vistas, filled with wonders one couldn’t have expected, because to have expected them, one would have already had to know what one hadn’t yet discovered.  And obviously one can’t do that.  We cannot ever, in principle, predict the specific shape of future discoveries and knowledge before they are created, for to predict them, we would already have to know them, which we don’t.  Quantum Electro-Dynamics***.

So, it is with a guarded sense of optimism that I approach the new year and new decade, and I hope you are also able to be reasonably optimistic, while still always maintaining a habit of self-improvement, and trying to see as clearly as you’re able.

Finally, with respect to writing/authoring news, Unanimity is coming along well and should be out sometime in the early part—at least the first half—of this year, hopefully followed shortly by Dr. Elessar’s Cabinet of Curiosities.  And whither then, I cannot tell.

*Yes, I had the temerity to give it a hashtag.  It’s probably an unjustified bit of wishful thinking, in any case.  There’s little reason to expect people to see any more clearly, metaphorically, just because the year is 2020 than we ever have before.  But maybe we will.

**Though, admittedly, as I think I’ve said before, “new year”, “new week”, “new month”, etc., are arbitrary notions.  There’s nothing special from an astronomical point of view about any particular point in our planet’s orbit around the sun.

***In other words, “QED”.  That’s my little physics/philosophy joke.