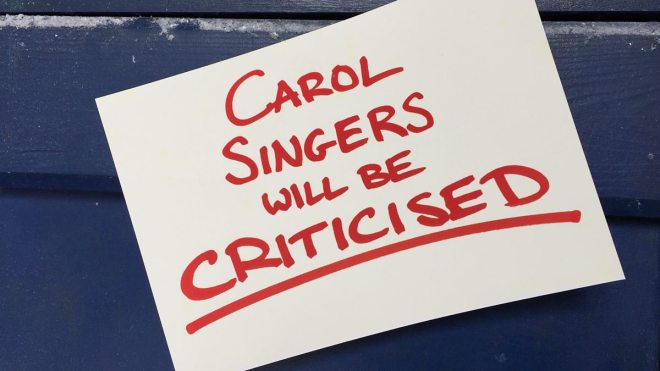 Okay, well, it’s Friday at last, and it’s “Christmas Eve eve” as I sometimes say.  It turns out that the office apparently isn’t going to be open tomorrow, which surprises me‒as is obvious, I guess.  I still could find out otherwise, I suppose, but I doubt it.

I’m writing this on my phone again, and I have been doing so most days this week.  I think I used my laptop on one of the days, perhaps Tuesday, but not on Wednesday, when I wrote my long and rather irritating post full of self-congratulation for deeds of the past that have no relevance to my current life.  That long-winded blather was from my phone, if you can believe it!

I actually slept comparatively well last night; I only finally woke up at about 3:50 this morning, which for me is about a two-hour lie-in.  I’m not even waiting for the first train of the day; I’m waiting for the second one!

I’m surprised that I slept quite so well yesterday, because I had an unusually bad day for pain‒or perhaps it would be better to say it was a good day for pain and thus a bad day for me.  The pain was focused in my right lower back down through my hip to the ankle and the arch and ball of my foot, but spreading up through to the upper back and shoulder blade and arm, and nothing that I did or took seemed to make more than a transient difference.

I was walking around the office like Richard the Third most of the day, when I was up.  We did get some very lovely cookies from my sister for the office‒she sends such packages often and they are beloved by all, and justly so‒but I couldn’t enjoy them as much as I wish I could have, because I was in a lot of pain and severely grumpy.

They were/are amazingly good, though.

I am still in a bit of accelerated pain this morning, but then I’m basically always in pain.  It’s not yet as bad as yesterday, at least, so keep your fingers crossed, please.  Or don’t if you’d rather not; I hardly think it actually has any effect on any outcome other than the configuration of your fingers.

I suppose it’s just a way for me to express my anxious hope mixed with fear and tension, and to invite some kind of shared emotional support from readers.  Though, of course, for that, it doesn’t make all that much sense, since how would I even know if any of you are crossing your fingers?  I suppose you could leave a comment saying that you are, but the very act of typing a comment must make it at least slightly less likely that your fingers are actually crossed, certainly while typing.

Anyway, I hope that my pain today is less than it was yesterday.  But even I personally will not be crossing my fingers, since I don’t think that gesture has any magical powers, so you shouldn’t feel obliged to do it, yourself, either.

Come to think of it, I don’t think anything has any magical powers.  My first thought about that is “more’s the pity”, but really, what would magical powers even be?  If they existed, they would be actual phenomena of nature, and would have some lawful underpinning and explanation.

That’s one thing I’ve always kind of been disappointed about in the Harry Potter books.  They take place in a school, and have genius characters like Dumbledore and Tom Riddle and Hermione, who surely would have curiosity toward the hows and wherefores of magic, yet there’s not even a hint of an explanation for how it works, why it works, what it actually is, or anything.  I think some touching upon that subject would have been very fun.

I mean, for instance, how does apparation work?  It involves a sensation of squeezing through something, but is that some form of hyperspace, or a wormhole, or what?  How do wands enhance or channel magical power from individuals gifted in magic?  How was that figured out for the first time?  Clearly people can do some magic without wands‒so, how necessary are they?

When did people begin to be able to do magic?  Clearly people haven’t always been able to do magic; there haven’t even always been people!  Was the ability to use magic some new, isolated mutation, like blue eyes, that spread through the population (as it surely would)?  Clearly it’s not some complex mutation, as it arises de novo in the human population, leading muggle-born witches and wizards to arise with some regularity.

Perhaps there is a complex of genes that, only when all present together (perhaps even only when homozygous) instantiate the ability to do magic.  Maybe most humans have some large fraction of the necessary genes‒after all, as I noted, the ability to use magic seems likely to have been a significant evolutionary advantage‒but it’s so easy to lose some necessary part of the biological (neurological?) machinery necessary through random mutation that most people are mutated slightly away from the complete set and so become muggles*.  Or, if born to witches and wizards they are given the derogatory term “squibs”.

I don’t recall how I got on this topic, but it is interesting, and I wish Rowling would at least have hinted at some studies or explanation, at least when discussing the Department of Mysteries.

Anyway, since I apparently won’t be writing a post tomorrow, I would like to wish all of you who celebrate it‒in the words of the late, great hero, Dobby the house elf‒a very Harry Christmas**.  Maybe take a moment to read the Christmas scenes in the various Harry Potter novels.  Christmas at Hogwarts, for the students who stayed over the holidays, seems always to have been an interesting occasion, albeit not as fun as Halloween.  Halloween at Hogwarts would have been quite the thing to experience. The only close contender that readily comes to mind is Halloween with the Addamses.  That would be interesting!

I guess I’ll be back on Monday, then, though it is at least slightly possible that I could be wrong about tomorrow.  If I am, I’ll be writing a post, and it may be quite a grumpy one, though maybe not.  After all, what do I have to do with my time other than go to the office?  Not much, honestly.

*This raises the odd thought for me about what might happen if a cancer developed that, by chance, has a complete set of magical genes, in a muggle who had been almost complete.  Could one have a “magic tumor”?  I guess probably not, since it seems magic would be a collective function of many aspects of the nervous system, not a property of every individual cell.  Perhaps this is one reason why wizards can’t just fix visual impairment‒Harry Potter wears glasses, and no one ever even suggests that magic might be able to cure his vision. But the eyes are, quite literally, extensions of the central nervous system‒though the lenses aren’t, come to think of it‒and maybe tampering with the eyes through magic is particularly dangerous, or perhaps the nervous system always rejects such attempts.

**As an aside, I have to tell someone that, in the song Have Yourself a Merry Little Christmas, I’ve always tended to hear the line, “Faithful friends who are dear to us gather near to us once more,” as if they are singing, “…gather near to us one s’more”, and I think, “How are they going to share one s’more between a group of people?  I mean, it’s “friends” who are dear to “us”, which to me implies at least four people, total.  How can you split one s’more between four people?  Also, it would make a mess, with graham cracker crumbs and melted chocolate all over various hands and the floor and all that.  Anyway, I know that’s not what they’re saying, but every time I hear it, those thoughts go through my head.