Okay, well, hello and good morning.  It’s Thursday and so it’s time for another of my weekly blog posts.

It’s been a particularly auspicious week for me, as those of you who follow my blog regularly will know, for this last weekend I finally published The Vagabond, a book I first began when I was in college, more than thirty years ago.  It’s amazing for me to see it out there; I received my own copy yesterday afternoon, and I’m very happy with the way it turned out.  I’m always at least a bit nervous before I see the physical form of any book, and this one was more nerve-wracking than most, because it’s a book of such importance and provenance for me.  It’s only the second full novel I ever wrote—the first is truly lost in time, and I can’t imagine any way it could be found, since it was hand-written on notebook paper, and is gone with everything else I owned before 2013.  I wish I had protected it better, or done more with it, but I had no idea that my life could take the turn it did, and I can’t change the past in any case.

That book would have needed a lot of fixing up.  I wrote it in high school, and it was quite a mess, physically, and certainly it would have required extensive editing as well.  As I might have said before, I occasionally entertain the notion of someday recreating it—I certainly remember the story, and most of the names of the key characters.  But it would take a lot of work, and I’m just not sure I’m motivated to do it, or indeed that I’ll ever really have the opportunity to do so.

Speaking of things written in high school, though, I am happy also to tell you that my short story, House Guest, which contributed to me winning an NCTE award in 1986*, has now been retyped into the computer (saved and then backed up in two places!), and I’m beginning to edit it for eventual addition to my planned collection, Dr. Elessar’s Cabinet of Curiosities.  I may also add to that collection a short story I started writing in about 2012 but didn’t finish, called In the Shade.  Of course, that would mean that I’ll have to finish it now, but that’s not a big problem.  It was most of the way done already, and I know how it will end.  With those two stories, there will be at least two “previously unpublished” tales in the collection, which seems only fair to those who will buy it.

House Guest is, possibly to the relief of some readers, much shorter than many of my more recent “short stories” which are not quite long enough to be novellas but often tend to be about sixty pages long.  I wonder what’s led to me writing such longer stories than I used to write.  Some of it is no doubt just age-increased patience and practice, but I also sometimes wonder if the fact that I can write so fast on a computer leads me to run off at the keyboard and get carried away.  I may have said it before, but I can type (with a word processor) almost as fast as I can speak, and more coherently.  On the other hand, I wrote Mark Red, The Chasm and the Collision, and my “short story” Paradox City all by hand on notebook paper propped on a “photo album”, under less-than-ideal circumstances, and they aren’t especially short.

So perhaps it’s just me, or that I’ve grown to want more detail and conversation in my stories than others might even like.  I don’t know.  I have received at least one review of my short story Penal Colony that said that they thought the conversation between the two main characters dragged on too long.  It’s a reasonable criticism, and I appreciate it very much—though, to be fair, real conversations do tend to drag on.  And I tried to use the interaction to reveal the quite unusual background of one of the characters in a natural way.  But it’s possible that I got carried away with just pleasing myself.

Of course, if I can’t please myself, I don’t know that it matters if I please anyone else.  But that’s a philosophical question not worth addressing here.

Anyway, I have tentative plans to try an experiment.  Once I’ve finished the stories for the collection, and have then finished Outlaw’s Mind (which is already being written on the computer, and became too long to be any kind of short story but will probably end up as a novella or a short novel) I plan to write whatever I write next—assuming that I’m still around—by hand, on notebook paper, though I’ll use a clipboard this time instead of a photo album sold, for some reason, in the prison canteen**.  It’s not set in stone, but that’s my tentative plan.  At least paper on a clipboard isn’t subject to power outages.

As far as being still around, yesterday I took at least one step toward making that more likely:  I got my first dose of the Covid-19 vaccine.  It’s the Pfizer one, and I’ll go back for my second dose in three or so weeks.  Between the vaccine and having had the actual virus, I should be reasonably protected going forward, assuming the protection is shown to last for a decent time.  Since this deed protects me and, more to the point, those around me, it seemed like the thing to do.  No protection is perfect, of course, and no one is ever completely safe.  “No one here gets out alive,” after all.

That’s a sentiment that the title character of The Vagabond might celebrate, though he tends to think that ordinary death is too quick and easy, preferring to terrify and torment the poor mortals he encounters.  If you like stories about such beings, and about the attempts of accidental heroes to fight against them, then please do pick up (or download for Kindle), a copy; I think you’ll enjoy it.

And while you’re waiting for this or my next works to arrive and/or be available, do please take care of yourselves and each other—for instance, by getting vaccinated, if you’re able, an act which works toward both of these aims.  Stay healthy and safe as much as you can and do your best to be happy at least part of the time. 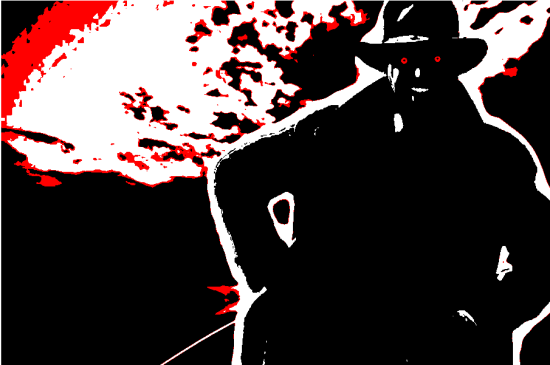 *So that story is thirty-five years old, but it has in a sense been “published” or at least evaluated before, unlike The Vagabond.

**I guess the idea was that prisoners might have family members sending them photos to remind them of home, which is nice, though it can also be tormenting.  I’d be mildly interested in what the thought processes were behind the choice to make that available.  I’m glad it was, though!