Hello and good day.  It’s Thursday morning, and so it’s time for another of my weekly blog posts—though I almost forgot about it and simply started editing Vagabond instead.  I guess that’s a good indicator of how dedicated to the editing I am, but it’s a little embarrassing.  Still, I suppose it’s not all that embarrassing, or I wouldn’t share it.  Or perhaps sharing the embarrassment is a way of diffusing and defusing it—after all, I can tell myself that if I’m not afraid to share it, it must not be all that bad or all that serious (which, of course, it’s not).

Enough self-psychoanalysis.  It’s been a reasonably productive week, and on Monday morning I came to a decision:  At least for now, I’m going to stick with editing Vagabond*, rather than working on Outlaw’s Mind.

I haven’t come to this decision lightly.  I simply noticed that, each morning, when I was starting on the new writing at the beginning of my schedule—knowing that I would, after about a thousand words, switch over to Vagabond—I was less enthusiastic about the new work, and frankly felt an unpleasant tension.  This was mainly because of time constraints, but also due to the division of focus.  Working on both projects at once makes both take longer than they would otherwise; it makes the whole process less efficient, as does essentially every form of multi-tasking.  It became clearer and clearer that, if I worked on both “at once”, they would both come out later than the likely finishing point of even the second of the two if I just worked on them one at a time.

Also, the mental shift from one story to the other was a minor daily lurch.  Though both could be considered horror stories, Outlaw’s Mind is a much subtler, more slow-growing, almost psychological horror—the presence of the word “mind” in the title might make that obvious—whereas Vagabond is pretty much a straight-up, gonzo horror story.  The former does have an element of the seemingly “supernatural” but it’s not obvious or in your face.  Whereas Vagabond is all about that supernatural intrusion of a force of evil upon the otherwise mundane world.

Also, though it’s true that I’ve put off Outlaw’s Mind due to the very long process of editing Unanimity, it’s certainly fair to say that Vagabond has been waiting much longer than Outlaw’s Mind.  It’s been waiting almost thirty years—possibly a bit more since it was first started.  So, The Vagabond has priority, at least for now, and I intend it to be my next published work**.  After that will follow Outlaw’s Mind, which I’ll need to figure out whether I can fit comfortably into the planned Dr. Elessar’s Cabinet of Curiosities, or if I’ll need to have it stand alone.  In any case, the Cabinet will likely have at least one “new” story no matter what, because I intend to recreate the remainder of my old short story House Guest, which is even older than Vagabond, and include it in the collection.  Don’t worry, that shouldn’t delay things much.  It truly and honestly is a short story, and making it any longer would be to its detriment.  So let it be written; so let it be done.

On other matters, I keep thinking about possible ways to work into my schedule the writing of at least a weekly post on Iterations of Zero.  There are many subjects about which I’d like to write—and IoZ is a blog that can be about anything and/or nothing—but which I feel don’t really match the tone of this, my author-oriented blog.  I’ve toyed with the notion of combining the two, but I fear the strange collision of other types of articles with the ones here, which are mainly about creative writing and related matters.  If you’re not sure what I mean, take a trip to IoZ and check out a few random things I’ve written there.  Then, if you wish, you can let me know your thoughts on whether they would be appropriate for this blog.

Of course, I can’t close without reminding you that Unanimity: Book 2 is coming out next Tuesday, September 22, 2020, and is available for pre-order in e-book format (for the print format, you’ll have to order once it’s out).  If you haven’t ordered Unanimity: Book 1 yet, there’s still time to get it and even to read it before Book 2 comes out, and of course, I encourage you to do so.  One reader of Book 1—who shall remain nameless until and unless I receive permission to share—told me that her mind was blown already by chapter 6 and 7.  And that’s before any of the real horror starts***!

Speaking of real horror, please everyone, stay safe and healthy out there.  And try to take advantage of the relative decrease in travel and interaction by getting some good reading in.  Written language is the lifeblood of civilization, and thankfully it can even be enjoyed when one is socially isolated. 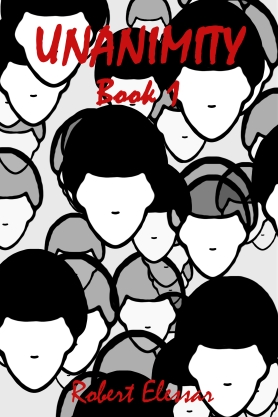 *Or The Vagabond as I think I’ll title it in the end, since there’s a revered manga series whose English title is Vagabond, and though there’s essentially no chance of confusion between the two, I hate knowingly repeating a title.  Also, all the characters in my story, once they know the antagonist’s chosen title, refer to him/it as “the Vagabond” and not simply “Vagabond” as though it were a given name.  This will be a bit of a wrench, since I’ve simply called the story Vagabond since I first started writing it, and single word titles can be dramatic.  Then again, the definite article does often convey a certain gravitas.  Also, I just published Unanimity, which is definitely—and inescapably—a one-word title.  Why do the same thing twice in a row?

**I’m planning on recreating a picture I drew a long time ago, portraying the title character standing by the road and thumbing a ride.  I loved that picture, and it’s a brilliant option for the cover, but I cannot for the life of me locate it in any of the old sources of my artwork (since all the physical drawings and paintings are lost and probably destroyed).  Perhaps I can find it in my ancient MySpace page, but I’m not optimistic.