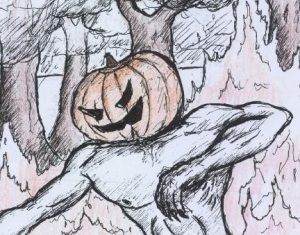 Hello and good morning!  It’s Thursday, so it’s blog day, as is probably unnecessary to point out, since you’re reading this.  Still, you might be reading it at some later date, and not have realized on which day of the week it was written.  So, perhaps it’s okay that I start most of my blogs with the usual repetitive reminder.

Be that as it may, this Thursday is special, because it’s one week until Halloween, my favorite holiday—for what are probably obvious reasons if you’ve read my stories.  Given the time of year, I thought to myself yesterday that I’d read something good and seasonal, i.e. a horror story…one of my own.  I started with Prometheus and Chiron, but I realized soon that it was simply too dark and terrible for me right now*.  Instead, I went to Welcome to Paradox City and started to read its the second entry:  If the Spirit Moves You, which is set the day before Halloween.  Though the story begins with the protagonist seeing a ghost, it’s not dark or scary at all.

I’m a little sad not to be publishing any horror stories this year around Halloween.  It would be a nice pseudo-tradition to carry forward, but I just really don’t want to get distracted from editing Unanimity, which is coming along nicely, but which is soooooo lengthy a process.  If I were to write something new while working on it, it would slow everything down, and that’s just too discouraging to allow.

It’s a particular shame, though, because over the years I’ve learned that writing new stories is a good way to mitigate my dysthymia/depression, which otherwise makes me almost as unbearable to others as it makes me to me.  This is especially true in the morning; often by mid-afternoon my mood and temper begin to swing upward and I’m actually capable not just of facial expressions, but even the occasional tiny smile.  Until that time of day, my face feels not so much paralyzed as embalmed.

Thankfully, depression isn’t truly contagious…though those who suffer from it are well-advised not to come to me for cheering up early in the day.  I’m as likely to talk them further down into the pit as to lift their spirits.  This wouldn’t be out of cruelty or malice; it would just be me expressing my honest thoughts and feelings at the time.

Anyway, enough of such dark things, we were talking about Halloween and scary stories.  Once I’d started re-reading If the Spirit Moves You, I was inspired to listen to the YouTube upload of another Halloweeney story this morning on my commute.  That is, of course, Hole for a Heart, which—though certainly dark—is not as bad as Prometheus and Chiron (also available to listen to on YouTube).  I’m enjoying it, even despite listening to my voice reading it, which as anyone who’s listened to recordings of themselves would predict, never sounds quite like how I hear my voice in my head**.

I’m truly blessed to be an author who enjoys reading—and listening to—his own stories.  This may seem narcissistic, but it’s not merely egotistical.  I really do, honestly like my stories.  And, of course, at this time of year, I’d love very much to share them with as many people as I can.  So, please, if you have a spare bit of time, give a listen to one of my short stories on YouTube.  These include I for one welcome our new computer overlords, Prometheus and Chiron, and Hole for a Heart.  I haven’t done audio of Penal Colony (which isn’t really Halloweeney, anyway), or Free Range Meat (which definitely suits the holiday).  Perhaps I’ll do those sometime soon.  Reading a short story aloud is much less daunting than is reading a novel; I stopped after nine chapters of The Chasm and the Collision, because I wasn’t getting enough feedback to justify the ongoing effort.  But, if those of you interested in some spooky stories give some of these a listen (and, if interested, if you buy an e-book version, each of which is less than a buck on Amazon), and especially if you tell me you enjoy them, I’d probably be inspired to do some more, and maybe even to finish up CatC.  Who knows what might come after that?

So, I not only invite, but I attempt to cajole, you to give the stories a whirl.

Next week’s blog will come on Halloween proper, so I’m likely to go on even a bit more about scary tales and related phenomena.  I hope you all have a fun time in the week leading up to it.  Attend some work-based (or school-based) Halloween parties, eat some sweet treats, dress up as your favorite Halloween-themed character***, and enjoy yourself!  By celebrating the dark, the supernatural, and the death-related, we really are celebrating life, it seems to me, and more so on Halloween than on any other holiday.  It’s only when you really feel you have a handle on something that you’ll willfully expose yourself to a source of fear just for fun.

Maybe that’s why Prometheus and Chiron is harder for me to reread.  Maybe I don’t have as good a handle on the stuff in there as I’d like to have.

Well, you can judge for yourself.  In the meantime, have a wonderful, spooky, and candy-filled week! 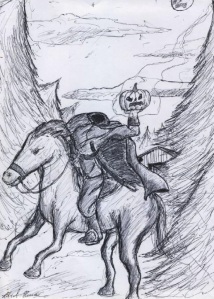 *I’m not just saying that to hype my own work.  It’s simply that the fate of the main character, and the cause of that fate, are too dreadful, given my own history and tendency toward gloom.  Of course, I have only myself to blame, since I wrote the story.

***And don’t worry too much about political correctness when you do.