The picture seen here is an edited Facebook posting by someone I know, and as you can see, it supposedly shows the face of a man who was brutally beaten – by a Marine, apparently – in response to having stepped on the American flag.  This would be bad enough in and of itself if it were an isolated incident or sentiment.  It isn’t.  It’s one of many expressions of desire by Americans (including, apparently the current President) that those who “disrespect” the flag should face consequences ranging from prosecution to out and out violence.

This is an obscenity, and an affront to the ideals upon which this nation was founded.

Let me make my point of view on this clear:  If the above statement is true and not merely a bit of “poetic license,” then the individual who carried out the beating shouldn’t merely be prosecuted.  If still on active duty, he should be dishonorably discharged.  In addition, he should lose any and all benefits he would have received as a service member, because he has apparently chosen to disregard his oath to support and defend the actual CONSTITUTION of the United States, and replaced that oath with the violent worship of a piece of cloth.

Anyone who honestly expresses the wish that a person – especially an American citizen – who “desecrates” the flag should face anything but debate and discussion has utterly missed the point of the United States.  The first Amendment, the cornerstone of the Bill of Rights, guarantees the freedom of speech to every citizen, and that includes speech that is offensive to any given listener.  You are free to disagree with and to decry that expression, to call someone an asshole, or to ignore them.  You are not free to harm or otherwise punish them.

Even conservative Supreme Court Justices have come down in favor of this interpretation of the Constitution, and the Founding Fathers would surely concur.  Flags, after all, are merely symbols.  They were originally battle standards to identify one’s compatriots in the field of conflict, and later became even more important in identifying ships at sea.  (Indeed, our flag’s pattern was modeled after the standard of the British East India company, to which it bears a strong resemblance, as you can see.) 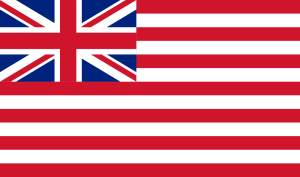 It even has the same number of stripes!  Are we to brutalize an American citizen – or anyone, really – for “desecrating” the symbol of a defunct British colonial, commercial enterprise?

Maybe the problem arises in part from the fact that we brainwash our children – in some places, daily – by having them recite a pledge of allegiance “to the flag.”  This is, of course, followed by the near-afterthought “and to the republic for which it stands,” but how many who regularly recite the pledge even know what those subsequent words really mean?  Not many, based on the attitude of the average citizen.

Then, of course, our very national anthem expresses worship for this bit of textile, barely mentioning, in passing, that America is the land of the free.

But it isn’t the flag that made America great, and thoughtless, blind, and especially violent, worship of it does not constitute patriotism.  America is a great country because the ideas and ideals upon which it was founded are great.  Those ideas are first expressed in the Declaration of Independence, and were later codified into the law of the land in the Constitution, with its attendant Bill of Rights.  These still stand as some of the greatest, most remarkable political documents humanity has yet produced.  If you haven’t read those documents – with some regularity – and thought about what they mean, then I don’t understand how you can consider yourself an American patriot, no matter how thuggishly you bully people who don’t share your unthinking reverence for the flag.  But I am open to discussion on the issue.  Feel free to try to convince me I’m wrong; I’ll entertain any rational argument.

Don’t mistake me:  I’m a fan of the United States flag, and I treat it with respect.  But I am a far greater fan of the Constitution.  I don’t worship it.  It’s not a perfect document.  But its framers recognized that fact, and built into it the means by which it can be amended and improved over time, like Operating System upgrades.  The first ten of these amendments are called the Bill of Rights, and the newly created United States would not ratify the Constitution without them.  I come as close to reverence for these ideas as I do to any in the political world, and they are far more important to me –  to all Americans –  than the flag could ever be.  I think my feelings are well expressed by an excellent magic trick performed by the brilliant stage magicians Penn and Teller, which you can watch here.

In closing, I reiterate that I respect the flag because of what it symbolizes, and there’s nothing wrong with you respecting it.  But don’t swear allegiance to it, and for heaven’s sake, don’t worship it.  It’s a piece of cloth.  Give your allegiance to the ideals on which our country was founded, and up to which we have constantly and imperfectly struggled to live.  If you see some one step on, burn, or otherwise disrespect the flag, by all means, disagree with them, if you wish.  Argue with them, “unfriend” them, explain your point of view to them, tell them why you think they’re being assholes.  That’s fine.

But if you try to punish them, either directly, with violence, or through the misapplication of the law, then you are not being an American, let alone a patriot.  You are simply a thug, a bully, an intellectual coward, and a criminal.  The world has too many of those already.

One thought on “The Idolatry of the American Flag”